This writing style guide is intended for those who write customer-facing content for M-Files and other related products. It provides stylistic and grammatical guidelines as well as punctuation ground rules for writing clear and consistent user documentation. The style guide also includes specific guidelines for creating user interface texts. These guidelines should be followed by everyone concerned to ensure that all content is written in the same, clear, and concise manner.

This section applies to user interface texts only.

This section outlines the style conventions used for at M-Files.

The tables below list spelling differences of words and suffixes (word endings) between Standard American English and British English. Please note that the lists are not by any means exhaustive, but they cover some of the most common differences. Whenever you are unsure of how a word is spelled in Standard American English, consult a dictionary, such as the online dictionaries by Merriam-Webster or Macmillan.

Avoid large chunks of text. Too much text in the user interface looks scary and lowers the chance of the user actually reading it. In documentation, the maximum number of words in a sentence is:

Capitalization means writing a word with the first letter as an upper-case letter and the rest of the word in lower case. This section sets the ground rules for using capitalization in M-Files content.

Headings should use the so-called title case, in which the first letter of each major word in the heading is capitalized, including individual words in hyphenated word combinations (such as Client-Side Registry Settings). Articles (a/an/the), conjunctions, and prepositions with fewer than five letters are not capitalized unless they start the heading. Examples of conjunctions not to be capitalized are and, but, and if. Examples of prepositions not to be capitalized are at, to, for, and with.

In contrast to the title case is the sentence case, which is the standard way of capitalizing English sentences. In the sentence case, only the first letter of a sentence is capitalized and subsequent letters are in lowercase, with the exception of proper names and acronyms.

Here are some examples of the title case:

Comparison Between Esperanto and Ido

A Handy Guide to Cycling Routes in Tampere

Acronyms are abbreviations formed from the initial letters or parts in a phrase or a word. Examples of acronyms include URL, laser, HDMI, tRNA, and PnP. Acronyms are written in all uppercase, mixed case or lowercase, but most commonly follow the all-uppercase capitalization scheme, in which every letter in the acronym is capitalized (such as in HDMI and URL).

If the sentence begins with an acronym that starts with a lowercase letter, do not capitalize the first letter.

Some commonly used acronyms have taken on an identity as regular words. Such acronyms are therefore written in all lowercase letter. Examples of such acronyms include laser and scuba.

Do not use apostrophes (‘) when forming plural forms of acronyms. For example, write URLs, not URL’s.

Use title case for the following elements:

Use sentence case for the following elements:

Use sentence case throughout the user interface.

In addition to using colons (:) normally in any body text content, add a colon after the following elements:

Place a question mark (?) at the end of any question. This also applies to the user interface.

In the user interface, use both quotation marks and apostrophes sparingly. For example, referring to short command names does not usually require using quotation marks: Use the Refresh Now command to resynchronize the group members.

There are two types of dashes to be used in documentation:

You can create an en dash (–) by typing ALT+0150 on Windows or by typing a single hyphen between two words in Word with AutoFormat enabled. The en dash is commonly used for indicating a closed range of values. Follow these guidelines for using en dashes:

Use the hyphen (-) character in the following cases:

Use periods after complete sentences that are not questions or exclamations and that do not represent any of the elements mentioned in the following list:

Periods in the M-Files Mobile Apps

Include a period only after body text in message boxes and alerts. 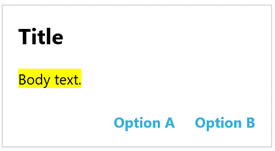 Do not include ellipsis (…) in user documentation even if the ellipsis is part of the user interface text.

Use ellipses to indicate that something is in progress or requires further user input:

Do not use a slash (/) as a substitute for the word or, that is, to indicate a choice between two or more alternatives. Use the word or instead.

Do not use deictic expressions like today, here, below, above, or on the left. Their context can change. However, when you refer to any commands, buttons, or other elements in the user interface, make sure that the user does not have to guess where to find them, either.

: A dialog is most often defined as a small window prompting for user response, whereas a window is a broader concept, essentially covering the term dialog as well.

Use a bolded font when referring to any user interface elements, like buttons, links, and titles. If font bolding is not available, use double quotes.

When referring to non-interactable user interface elements, use a definite article followed by the name of the element and then the type of the element:

The New User dialog is opened.

When referring to interactable user interface elements, use just the name of the element:

) button and then select Document… from the context menu.

If the icon is big, consider making the screenshot smaller.

For more information, refer to Editing Content in the M-Files user guide.

Here is an example:

Organizations have traditionally relied on Virtual Private Network (VPN) technology to secure access to corporate resources (such as M-Files vaults) from outside the private network of the organization.

Together, the HTTPS encryption and the use of a pre-shared key as a second factor in authentication provide similar security as VPN but without the complexity and compatibility challenges of VPN.

Remember to include all acronyms in the glossary of the document.

This section provides guidelines for the form and structure of headings. The following rules apply to all types and levels of headings:

Use first, second, and third level headings for structuring your document. Use a fourth level heading only if absolutely necessary. Do not use more than four heading levels.

Use the gerund (the –ing form that is used for forming verbal nouns from verbs) form of a verb as the subject in task headings, instead of the sentence-initial to-infinitive phrase or a bare infinitive. Below are examples of the correct and incorrect heading structure for task procedures. Instead of using the how to structure, use the –ing form in headings as well as in the document title.

Lists are used in documentation to lay out sequential steps for a procedure or to group related pieces of information together.

The rules for lists are:

Use numbered lists for sequential procedure steps to indicate the order in which a task must be carried out. When writing step lists, follow these guidelines:

This section provides rules for the following linguistic elements:

Even though proper names refer to unique entities, in some cases, it can be necessary to be more specific to make the reference to the name clearer. In these situations, pair the proper name with a superordinate grouping word, such as window or button, and with a definite article preceding the name:

Note that an entity denoted by a proper name may belong to more than one group. In such a case, just use the grouping word you need to refer to.

Write the proper name with initial capital and the grouping word with lowercase letters.

If the proper name is not followed by a grouping word (like in the M-Files software), do not use an article.

Correct: Everything in M-Files is organized by what it is instead of where it is stored.

Correct: Everything in the M-Files vaults is organized by what it is instead of where it is stored.

Incorrect: Everything in the M-Files is organized by what it is instead of where it is stored.

Do not use any special formatting for proper names, such as italics or bolding.

Use active voice whenever possible.

Here is an example:

Incorrect: The New Login Account dialog will be opened.

In the example, the present tense form can be regarded as an assertion, while the future tense form is more like a prediction.

Use future or past tenses only if it is required by the context, and if so, use only the simple forms of the past and the present tense. Note, however, that the past and the future tense are more acceptable in relative clauses than in main clauses.

Here are some examples of acceptable uses of the past and the future tense:

By enabling this setting, any of the objects that were included in an earlier export set, but are not in the current one, will be deleted in the target vault upon import.

Thanks to Automatic Updates, your M-Files installation will always be up to date.

Modals are used to express for example ability, possibility, permission, or obligation. Modal verbs include can, could, may, might, should, and must. In technical documentation and user interface texts, use should only if something is optional. If something must be done, always use must.

Use can to tell what the user or the system is able to do. Avoid using may. You can use it to describe possibility, but do not use it to tell that the user has permission to do something. As a rule of thumb, do not use might.

Modifiers are words that describe nouns. Modifiers in general can be used in two different syntactic positions:

Avoid gender-specific pronouns when writing documentation. There are a number of techniques for using gender-neutral language. The list below provides alternative ways of writing in a gender-neutral manner the sentence “The user can enter his e-mail address and his full name in the personal information fields”:

Avoid mixing the first person (I/me/my) with the second person (you/your). For users, it can be confusing to see both person formats in the same context. Generally, use the second person when asking questions, giving instructions, or describing things to the user.

Do you want to check it out so that you can edit it?

You can't use the same path multiple times.

In some cases, it can be necessary to use the first person to indicate the user’s ownership of content or actions:

Checked Out to Me

A contraction is a shortening of a word, word group, or syllable, created by omitting internal letters. Can’t, for example, is a contraction of cannot.

Do not use contractions in documentation. Always write the full form of the word or word group instead. One exception is of in the phrase o’clock, in which the contraction is mandatory in contemporary use.

The symbols used for numbers (such as 1, 2, and 3) are called numerals. The rules for using numerals are:

Numbers and Units of Measurement

Negative numbers are written with a minus sign (-) immediately before the first digit of the number:

Here are some examples:

When referring to monetary amounts, use one of these formats:

Negative amounts can be generally indicated with the words losses and deficit in descriptive texts to avoid using the minus sign (-):

When referring to dates, use these formats:

You may want to see these sources for additional information.